Tampines Eco Green: This hidden park in the east looks nothing like Singapore

The Tampines Eco Green park is one of a kind. It has no lights or pavements or even a distinct address on the map for that matter! This is one park that you need to visit for a unique experience that other green spots in Singapore cannot offer. 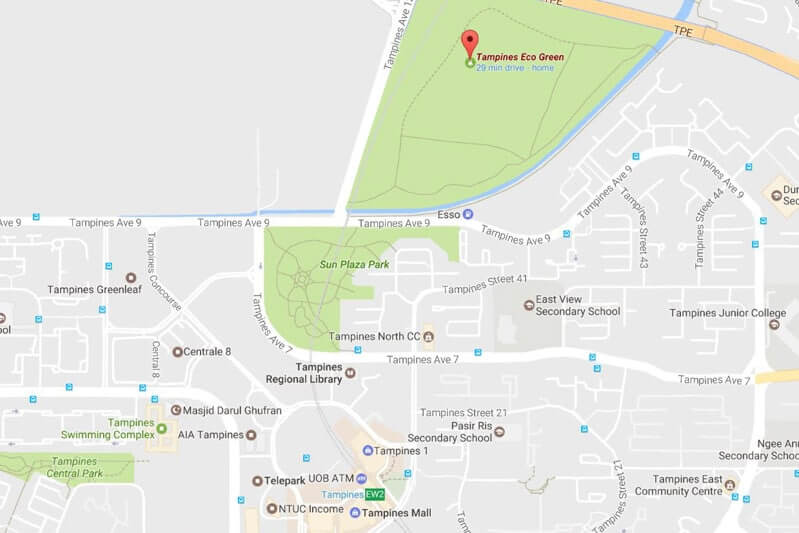 Not many people know about this elusive park as it is hidden away between the expressway and Tampines Ave 12.

I mean, can you see the signboard of the park in the picture above? Even if you’ve seen this scenery hundreds of times, it’s hard to realise that there’s a whole park right behind that canal.

The very obscure signboard is actually made from wood, which is why it camouflages so easily into the scenery.

It is only if you walk on the pavement along Tampines Ave 12, that you are able to see a remote clearing. My friend was pretty surprised when I told him that this was the main entrance of the park. He wasn’t the only one either, as cyclists would just ride by the park, oblivious to the fact that it existed.

Once you’ve ventured into Tampines Eco Green, you will almost feel like you’re walking into an actual forest.

Tampines Eco Green actually used to be a lot more rugged that what it is today, with a lot of mud and narrow pathways.

NEA has made it a lot more ‘manicured’ over the years, with straight and flat paths that are easier walk on, inviting more locals to jog along the trails. Despite this small upgrade, the wildlife at Tampines Eco Green is still quite rich, with birds such as (top to bottom) the Blue-capped Cordon-bleu and the Asian Golden Weaver.

I had a difficult time getting a good picture of the birds I saw as they were all so high up in the trees. You will really need a DSLR, preferably one with long lenses to get a nice picture.

I had a far easier time capturing pictures of insects such as bees and dragonflies.

If you don’t have a camera that can capture quickly-moving creatures, you will have a better time taking snaps of the beautiful flowers that can be found in the area.

You can also spot the hanguana rubinea (above), a newly discovered plant species that is native to Singapore alone.

One thing that I really liked about Tampines Eco Green was that man-made structures are kept to a minimum, with simple shelters dotting the landscape only every kilometre or so.

There were also some curious looking wooden structures, which I can only assume are part of an outdoor activity.

Though Tampines Eco Green is a pretty basic park that tries to mirror the wild, there are still various trails and areas that can be explored.

Not every place is marked, though. We stumbled upon a hidden grove off the path which had about 10 butterflies just fluttering around the greenery. The only places I have seen in Singapore with more butterflies are man-made butterfly gardens. It was really difficult to capture a picture of a butterfly though, as they are a lot faster than you would think!

Other than the wildlife, we had a great time just being in nature, listening to the rustle of the tall grass in the wind, and gazing at the incredibly blue skies that day.

On a side note, I think we actually heard the “call of nature” as there was an insect or bird that bizarrely sounded like a ringing office phone!

It was a strange and funny experience but I think it goes to show how there’s a whole lot of nature and wildlife that is waiting to be explored in Singapore.

This article was originally published on Hype & Stuff.

What to do in Singapore: 12 things to do in Tiong Bahru